Posted at 15:38h in Uncategorised by Site Editor 0 Comments
0 Likes 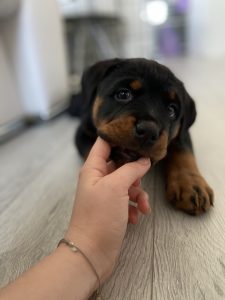 With UK shelters all too often filled to capacity, and under significant pressure with full waiting lists (Stavisky et al., 2012), it is key for us to understand where dog ownership is going wrong. Diesel, Pfeiffer and Brodbelt (2008) found that from the 14.7% of failed adoptions from Dogs Trust UK, the majority were because of behavioural problems, with around 60% of dogs returned for this reason. Blue Cross, a key UK Dog charity saw 10.4% of their adoptions returned  because of behavioural problems (Bailey, Hetherington and Sellors, 1998). It is therefore key to success of adoptions that behavioural problems are dealt with (Diesel, Pfeiffer and Brodbelt, 2008; Diesel, Brodbelt and Pfeiffer, 2010).

It is commonly known that socialisation is needed to produce a well-adjusted, behaviourally sound dog (Serpell and Jagoe, 1995; Sforzini et al., 2009). Critical periods of socialisation (between birth- around 12 weeks) are the most poignant times in the dogs life for avoiding fear or aggression type behaviours towards people and dogs (Appleby, Bradshaw and Casey, 2002).

This begs the question; would early training prevent behavioural problems from arising?

Indeed Kutsumi, Nagasawa, Ohta And Ohtani, (2013) set out to answer just that. They evaluated 142 dogs who had undergone different types of training, at different ages, and found that dogs undergoing training classes both as an adult and puppy responded significantly better to commands than those that did not train or went to ‘puppy parties’ (pure socialisation sessions). Perhaps most significantly, this study found that puppy training was most effective in ensuring dogs had a positive response to strangers- this finding is particularly interesting as puppy training was indeed more effective than ‘puppy parties’ in this measure, showing it is not just the dogs age, but, the activity that matters.

This corresponds to results of a similar study, which found that dogs who attended puppy class had a higher retention rate in homes (Duxbury et al., 2003). Interestingly, authors of the first study mentioned here note that it was easier to recruit owners to puppy parties than it was to puppy classes- perhaps to the detriment of their pet.

Another more recent study (González-Martínez et al., 2019) found that these positive effects on temperament, again seemed to occur regardless of the dogs age when attending classes. Here, all attendees had better scores in measures of dog-aggression, trainability, fear and touch-sensitivity.

Overall, it is clear to see that the scientific research available at the moment points to puppy training, and indeed training at any age, being a great choice for owners. Dogs who experience training benefit from a higher probability of staying in their homes, and develop temperaments more favourable to living in harmony with humans.

Serpell, J. and Jagoe, J. A. 1995. Early experience and the development of behaviour. pp. 79–102. In: The Domestic Dog: Its Evolution, Behaviour and Interactions with People (Serpell, J. ed.), Cambridge University Press, Cambridge.