Can owners influence a dogs choice? 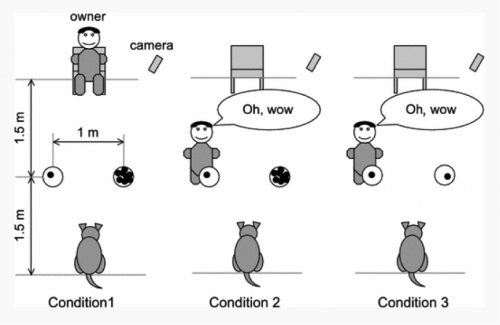 20 May Can owners influence a dogs choice?

Dogs, as group-living animals, are subject to social influence when making decisions. New research shows that when given misleading information from humans, dogs will counter-intuitively choose smaller food portions.

Any dog owner will jump at the chance to tell you just how clever their dog is, and with new research continuously shedding light on canine cognition, scientists are beginning to ask: ‘just how clever really is mans best friend?’ It has long been understood that pet dogs are exceptionally adept at reading human cues but just how they are able to do has remained relatively unknown. Not only is this of interest to pet owners, but gaining insight into the mind of the dog is central to our understanding of evolutionary biology. This is due to dogs uniqueness, as they have lived along side humans for over 10,000 years- longer than any other domesticated animals [1]. It is thought that this co-evolutionary process is responsible for their exceptional cross-species communicative abilities [2]. Such abilities demonstrate a kind of inter-species cooperation that is hypothesised to have arisen from domestication. It is key here to understand that behaviour is defined as cooperative only if it has evolved at least partially to provide benefit to another individual [2]. Thus, understanding mechanisms involved in this process enhances understanding of how and why certain species have evolved to live in groups (both with conspecifics and other species). Scientists look to find evidence of domestications role in shaping such social behaviours through a variety of means. This novel study [3] shows dogs often choose smaller portions of food when influenced by humans. Explaining this superficially appearing paradoxical behaviour makes for interesting speculative enquiry upon the role of selection in forming cooperative behaviours.

Prato-Previde and colleagues investigated these cross species communicative abilities in their study, by providing 50 dogs with misleading information that contradicted the stimulus in front of them (food quantities)(see Figure 1). Dogs in this study chose the larger food quantity in control experiments with no owner influence, as predicted from prior studies by Ward and Smuts [4], clearly showing their ability to distinguish between size. When these same ’large’ and ‘small’ quantities were presented with a human preference performance towards the small bowl, this obvious favoring of the large food option was significantly reduced. Three separate conditions (illustrated in figure 1) were used to succinctly demonstrate humans’ potential effect on their pet dogs behavior. This observed effect is consistent with current literature surrounding the topic, for example dogs similarly seem to rely heavily on human gestures as opposed to perceptual information when searching for food [5]. These results all seem to then suggest to us that dogs are relying upon human cues, still the question remains, which cues and why? 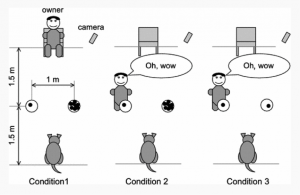 This study focuses on how social context and the opportunity to behave cooperatively affects a dog’s ability to accurately distinguish between differences in quantity. Such capabilities are of key evolutionary significance in the context of group-living as more adept animals are at a selective advantage. This is apparent in a number of social and ecological situations such as foraging, parental investment and aggression [6]. This therefore makes dogs decisions in this study to choose smaller portions significantly more often a surprising finding and one worthy of serious consideration. We know this not to be simply due to difficulties in discernment due to this studies use of control conditions but also from support of current work in this field. On study in particular has shown dogs similarly capable as apes in judging relative quantities of food, even potentially forming mental representations of the objects [7]. This then leads us to question how such seemingly counter-productive behaviour could have evolved. It is possible that in choosing to follow owner suggestion, dogs are actively working to reinforce social bonds and this type of cooperation works to enhance pack harmony [8], instead of serving immediate individual benefits. This provides a potential explanation of the selective advantage of behaviours witnessed in this study, in non-starving situations.

The domestic hypothesis suggests that cognitive abilities in dogs are a result of their selection process [9], and this study may indeed provide support for that. However, before such claims can be made, it is imperative to consider the complexity involved in proper analysis of social behaviour. Firstly, it is of note that subjects were all bonded prior to experiments (owner and pet dog as opposed to use of a random human) and thus the role of ontogenetic behaviour- that learnt in the animals lifetime- versus innate behavioural responses should be considered. In order to better separate these two explanations, other studies look to the use of dogs raised in more controlled environments, previously unknown to one another human-dog couplings, and cross comparative experiments with wolves [7, 4, 10]. Extensive work into investigating the role that domestication of dogs has played in facilitating their cooperative behaviour towards humans has been carried out by one of the pioneering minds in the field Brian Hare. He has analysed canine behaviour through many experiments, but arguably of most note in this instance is his response paper of 2010 [9]. Several studies exist that provide compelling experimental evidence that social behaviours seen in dogs are not a result of domestication, merely skills inherited from their last common ancestor [10], due to the fact they appear to be learnt or are found in wolves [11]. Hare however, argues that related species being able to learn to use human communicative gestures can be mutually inclusive with the domestic hypothesis. He argues that whilst learning may play a part in facilitating the use of these higher level cognitive skills, it remains likely that domestic dogs do still possess special skills (the capacity to learn) in the context of related undomesticated species such as wolves and foxes.

In considering how the results of this experiment shed light on evolution of cooperative behavior in dogs, it is important to focus on the specific mode of communication and how this may be processed by the dogs. Researchers here, in discordance with previous work [9,11], instructed participants to pick food up and use tone of voice to express preference, as opposed to gesticulating at the food (easily likened to a command). In this way, the study is novel in that it gives insight into dogs’ likelihood of actively seeking assistance, as opposed to perhaps just following actions deemed as orders. An example of the potential confounding effects here can be found in Wobber et al’s finding [12] that ‘working-dogs’ (those bred selectively for their cooperative abilities) were more skilled than other breeds at using human gestural cues. One may deduce from this finding that specific breed level selection, beyond that just of basic domestication, has shaped social cognition differences between these animals and hence their tendencies to follow commands.

Despite attempts to eliminate the potential of dogs responding to commands, this study still leaves us uncertain as to exactly what social cue dogs were processing and responding to. The study involved a multitude of potential variables: contact with the food item, tone of voice and the owner’s presence for the entire duration of each experiment. Separating all these variables is key in understanding mechanisms underpinning these social behaviours, and a recent study from Colbert-White et al (2018) [13] elegantly achieves this. Here, the only social cue is that of the tone of voice used by humans (participants were informed to face the wall and use ‘non-words’). This study therefore demonstrated the very subtle cues dogs can use to influence their decision-making.

When interpreting results from observational studies such as these it is of course key to note the potential effect of subjective human interpretation and low sample sizes and seek more rigorous scientific support. To fully gain insight into exactly what stimulus our dogs are responding to, studies of dog and human brains have been conducted by Andics et al (2017) [14]. Here, areas associated with reward regions were found to separately respond both to the actual words used as well as the tone of voice. This type of objective study provides key support for observational work occurring in the field of canine cognition and so allows us to make holistic and more informed hypothesis when directing future work. When approaching the subject of selections role in shaping cooperative behaviour, the use of combined experimental and observational work together, is key in furthering our understanding of these cognitive processes. Ideally, we wish to gain insight into this area in order to better comprehend how domestication has shaped cognitive processing in dogs. This may then go on to inform a wide range of areas, from research into how selection has shaped humans’ social problem solving skills, to better informing methods of assistance dog training.