How were dogs domesticated? What really is the origin of domestic dogs? An examination of Wang et al’s (2013) experiment.

20 May How were dogs domesticated? What really is the origin of domestic dogs? An examination of Wang et al’s (2013) experiment.

Dogs and humans lived together and therefore shared the same living environments and food, meaning that they were likely under similar selection pressures. This essentially means that natural selection and subsequent evolution may have happened to in a similar way for both humans and dogs. A genetic analysis conducted by scientists and published in Nature set out to examine this hypothesis. 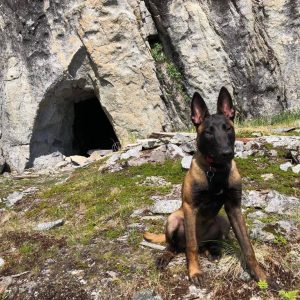 Genetic changes in dogs associated with the transition from wolves (such as they behavioural traits) have less attention than phenotypic changes have done (such as tail type, colour, size).

Whilst brilliantly extensive studies exist in experimentally manipulating the silver fox through the presumed process of domestication (Trut, Oskina and Kharlamova, 2009), this new study is novel in shedding light on the actual genes involved in building the domestic dog as we know it today.

The diversity in both dogs physical and behavioural traits in dogs is one of the most interesting examples of domestication . Also of interest is the type of long term domestication that has occurred here, with dogs being one of the few examples were humans have coevolved in this way with another animal. This makes the canine species a unique and invaluable resource in studying coevolution and indeed the process of domestication.

Intensive breeding programs have created an array of dog breeds, ranging from the tiny Yorkshire Terrier to the Great Danes. Throughout this change in appearance, there has also been a selection for an assortment of human favourable characters in behaviour.

With all this considered we can likely hypothesize that Genomic sequencing for Homo sapiens and Canis familiaris will show parallelism to an extent that hints towards coevolution of these species.

This study preformed whole-genome sequencing of 4 grey wolves, 3 Chinese indigenous dogs and 3 domestic breeds (one German Shepherd, one Belgium Malinois and one Tibetan Mastiff). They found 311 genes under positive selection. Most apparent were genes involved in digestion and metabolism, as well as those involved in neurological processing and cancer.

What does this mean?

A gene showing positive selection is the MGAM gene. This is an important enzyme involved in starch digestion. With wild dogs and wolves regarded mainly as scavangers of carnivores, the change to more agricultural based living as they started to be around humans is an important factor to consider. The transition from being a carnivore to an omnivore likely explains why selection was acting so strongly upon this part of the genome.

In addition, selection on behaviour (less aggression) and neurological traits (ability to better interact with humans) is a common factor in animal domestication.

Why do we see this change?

It is hypothesised that wolves might have been domesticated as scavengers that then began hunting alongside the humans. As this process continued through generations, genetic changes made it easier for wolves to live in harmony with humans.

I think it is most likely that the domestication process was continuous and dynamic, where dogs with extensive human contact were selected from these scavengers as humans began to adopt an agricultural life style.

I think Parallel evolution is important to consider today. These types of studies give us the opportunity to understand certain traits such as genes involved in cancer, digestion and neurological processing. Perhaps by studying the evolution and the phenotypes in both species simultaneously, we will be able to better understand how to treat humans with associated diseases.

NOTE: Another discovery that I find particularly interesting in this study is that population divergence time is estimated to be around 32,000 years ago, which is much older than previous estimates using mtDNA data (MacHugh, Larson and Orlando, 2017; Irving-Pease et al., 2018)